I have heard a lot of people say that there is no such thing as true love. I completely disagree.

Quite evidently, there is a lot of falsehood and deceit everywhere. In many cases, counterfeits are usually produced in larger quantities than the original because they are cheaper and easier to make; but the existence of fakes isn’t disproof of the existence and reality of an original, as a matter of fact, it proves it.

When Jesus hung on a tree on our behalf, he proved and preached 1 Corinthians 13 in its truest and purest form. No greater love than this, than a man should die for another, and Jesus did die for us. Even in fairy tales, the greatest expression of true love is painted as when a man sacrifices his life for his lover.

How then does this relate with your search for true love or the existence of it.

In several places, the bible relates the love Christ has exemplified for the church with the same a man should have for his wife. A husband is required to love his bride as purely, deeply and intimately as Christ loves the church. That love should be so strong that it makes him one with his wife such that he loves her no less than he loves himself.

This Christ-like love is God’s expectation and requirement of us as men. We are not expected to give anything less. God won’t ask us to give something we are not able to afford. For every expectation God places on a man, he accompanies with it the capacity to fulfill it. 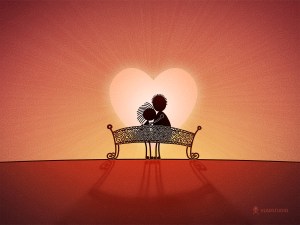 I therefore have no doubt about man’s ability to love his spouse truly and deeply, or on the existence of pure and true love.

We all just need to come to that point where we decide that we won’t give anything less nor settle for anything not true.

It is equally important that we don’t succumb to the idea of the non-existence of true love as claimed by several people who have probably had bad episodes in their lives’ drama.

It’s a lie you and I shouldn’t believe nor accept. Because our beliefs are simply thought patterns we have dwelt on for so long and have accepted as truth. As a result, they become self-fulfilling prophecies of our fate. The realities of our thoughts soon become the realities of our lives. If we choose to join the band wagon of people who claim and believe that only fake love is obtainable, then fake love would be all you can attract to yourself and give to others.

We must come to terms that true love isn’t just a fairy tale fantasy that is possible only in Disney movies, but rather a present day reality of a wise few who dared to believe in its possibility. We must believe that pure love is attainable even in this degenerated generation of ours.

We must believe that love is indeed beautiful and that we have the capacity to give and receive it in its whole, pure and best form; and that even if the true love doesn’t become everybody’s reality, it can and will be ours especially if we commit ourselves to giving it.

When you think this, that’s just what you’d get.